Who is Tim Dax? 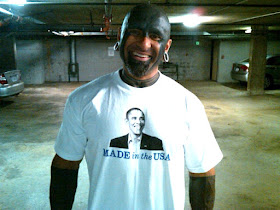 Photos: Image above courtesy of Tim Dax. Taken last year before the current media attention. Image below taken at the 2005 Heritage of Pride march by Andrés Duque.

As violence erupts across the Middle East once again there has been particular focus this week on a YouTube clip titled "Innocence of Muslims" and its role in inciting religious-based hate throughout the region.  Like many, I heard about the clip in the news but didn't necessarily plan to watch it -- that is, until Joe Jervis of Joe.My.God. sent me a message two nights ago to ask me if I recognized Tim Dax as one of the actors in the video and if I had his contact information (Joe remembered I had interviewed the actor last year).

Tim declined an interview with Joe but did provide him a written statement in which he denied he was in any way anti-Muslim, alluded to his lines being dubbed with somebody else's voice in post-production and said the role he was asked to play was different as the one portrayed in the film.

Yesterday CNN reported that 80 members of the cast and crew had released a statement denouncing the clip and saying they were duped by the producers.

I actually met Tim briefly during the 2005 Heritage of Pride march before he even had started to work on his unique facial tattoo work. Even then, he cut a striking figure and not only because he marched all the way down 5th Avenue wearing nothing but a pair of sandals and a black stocking cap wrapped around his privates.

He would walk a few meters and turn to the crowd. He'd make a couple of body building poses and hold them while the crowd went wild. I took a few photos and posted them on this blog. It still remains the top viewed blog post in the seven years since I started blogging.

Then there was one electrifying impromtu moment which made it that more memorable.  As we approached St. Patrick's Cathedral we ran into a number of homophobic fundamentalist protesters camped out across the street.

To their discomfort, Tim did exactly what he'd been doing all day. He turned around and gave them ample view of his back, took his time to flex and pose and hold still for each of the poses and then turned around to face them while he posed again. Finally, as he walked away, he simply held up both hands ans flashed them both middle fingers.

When Interviewed him last year I asked him about that specific moment and he said something that surprised me:

Looking back at his actions he seemed to regret he'd responded to their hate with hate.

I bring this up not only because it resonates now in light of the religious-based violence that has erupted this week but because under the glare of the international scrutiny some people have questioned his motives for participating in the film as well as his tolerance for other religions and cultures.  I also bring it up because 90% of the traffic hitting this blog right now is from people seeking additional information about Tim.

He also spoke to the local NBC affiliate in Los Angeles.

Last year when he spoke to me from Los Angeles - where he now lives with his wife Andrea Giacomi - Tim described the life of a man trying to break into the Hollywood acting scene.  He'd already bagged starring roles in two films from the notoriously cheesy but fun production company Troma (“Mr. Bricks” and “Slaughter Daughter”) and spoke honestly about the difficulties of breaking into the scene:


As an actor you have to take everything and at the very beginning it’s a lot of free work and you do anything and everything and I don’t believe in restricting myself so I take advantage of these opportunities when it comes to being an actor. That’s a music video, that’s theater, that’s acting in a haunted house if need be. Anything and everything to get to the bigger picture, the bigger goal, which is movie acting. I see a very successful future as a movie actor and I can see eventually getting into creating, writing – I do a little bit of writing now – and directing film as well. I see a huge happy future in Hollywood. No Doubt.

I've touched base with Tim a couple of times since the story broke and wished him the best.  Initially he was a bit reluctant to reply to press but I am glad he has done so.

All things Tim Dax:
Related: Inside the Islamophobic-Religious Right Alliance Whose Film Sparked a Crisis in the Middle East (AlterNet)

Thank you for always presenting the deeper story than the one the mainstream media scribbles out!