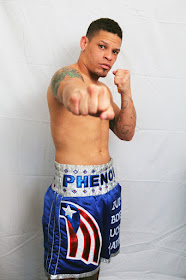 From a press release received tonight:

Cruz is the first openly gay man in boxing history.  “I’ve been fighting for more than 24 years and as I continue my ascendant career, I want to be true to myself,” said Cruz.  “I want to try to be the best role model I can be for kids who might look into boxing as a sport and a professional career.  I have and will always be a proud Puerto Rican.  I have always been and always will be a proud gay man.”

Cruz made his professional debut on December 15, 2000 and won his first world title on March 22, 2008 (vacant IBA Featherweight Title) and a regional title on October 14, 2011 (WBO Latino Featherweight title).  His next fight is scheduled for October 19 at the Kissimmee Civic Center in Kissimmee, Florida in which he will defend his WBO NABO title against Jorge Pazos.  A win against Pazos should position Cruz for a world title shot.

Orlando Cruz is sitting down with Telemundo’s Jessi Losada in an exclusive tell-all that will air next week.

UPDATES: Los Angeles Times has reached out to Cruz and spoke to him. An excerpt:

“I was physically and mentally prepared for whatever the reaction would be before this, and I can tell you from the response, this will never bother me again,” Cruz said. “I feel comfortable with myself.”

He also comes out as an advocate for marriage equaity:


“The gay community should have the same rights as the heterosexual community, and I want to be part of that movement to make that happen here,” Cruz said.

About those tweets Cruz mentioned to the Times...

So does Andra Fuller, who plays a hot-headed gay gangsta rapper on the CW's "L.A. Complex"...


Congrats to Boxer Orlando Cruz for becoming the 1st openly gay man in boxing history. Im sure a lot of people wish they shared his courage.
— Andra Fuller (@mrdrefuller) October 4, 2012

And the great Wilson Cruz...


RT @elfenomenocruz: As a boxer, I have always been and always will be a proud Puerto Rican gay man: bit.ly/T1VN7T // Amazing! WORRRK!
— Darryl Stephens (@darrylstephens) October 4, 2012


@markzustovich thanks Mark and Orlando Cruz was a huge step. Lets celebrate any gay athlete so others in any sport feel supported. Much love
— Wade Davis II (@Wade_Davis28) October 5, 2012


With each athlete, musician and icon who comes out, the road becomes less arduous for the next. And life gets just a bit better for LGBTs.
— Ben Patrick Johnson (@benpatrick90069) October 4, 2012

The news also traveled like wildfire throughout Latin America. Alex Freyre, who made history with his hubby José Maria DiBello when they became the first same-sex couple in all of Latin America to be granted a marriage license, also took notice...

What a wonderful act of courage from this young man who is hopefully not from an anti-gay religious culture like so many of us people of color are predisposed to... All the Very Best to him!