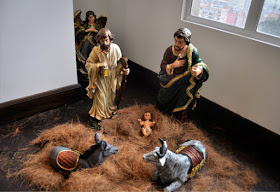 Photo: A photograph of a nativity scene deemed controversial by some media outlets has actually been online since February 2012 without drawing much reaction in the ten months since it was originally posted by Kien y Ke.

In December of last year Andrés Vásquez and Félipe Cárdenas opened their home to a couple of reporters from the Colombian online magazine Kien y Ke interested in portraying the life of a gay couple in Bogota.  In a profile that could have easily fit within the Sunday Styles section of The New York Times the couple described the joy of celebrating their partnership through a civil union ceremony held last year in Cartagena, they made recommendations about their favorite restaurants in Bogota, they discussed their love for fashion and they confessed having named their pug Louis in honor the luxury brand Louis Vuitton.

That probably would have been as scandalous a revelation if it weren't for the reporters noticing a certain clay figurine missing from the couple's nativity scene as described in the opening paragraph: "The Baby Jesus in the nativity scene that belongs to the Vásquez-Cárdenas family has two fathers, two Saint Joseph figurines. There is no room for the Virgin Mary."

The article presented this as an amusing anecdote and included a photo of the nativity scene within the post. Until a couple of days ago there were only five responses to the article, including one negative response, with no reaction whatsoever to the nativity scene.  This despite the fact that the article and the photo were posted online more than ten months ago with the page's social network buttons only registering 11 re-tweets, 8 Google Plus mentions and 53 Facebook likes.

I had seen the article when it was originally published months ago so imagine my surprise when I saw Colombian news conglomerate Caracol run the same image two weeks ago under the headline "Controversy due to a nativity scene in Colombia". The article briefly rehashed some of the information and said that the nativity scene had caused controversy even though it didn't make clear who - if anyone - had taken offense.

Editors at the Colombian website Sentiido had a similar reaction to the article and dug a bit deeper. In a post titled "How to create a controversy" they actually argue that Caracol picked up the post almost word for word from from a Terra.com piece that also ran earlier this month.  Terra also characterizes it as controversial but also fails to quote anyone who has actually taken offense.

Once Terra and Caracol jumped on the story there was no going back. A day after Caracol published their piece, the British tabloid Daily Mail picked up on the unsubstantiated information and  elevated the "controversy" to full blown "outrage" ("Outrage over gay couple's homosexual nativity scene with two Josephs and no Mary").

On Friday it made its debut States-side with The Advocate picking up on the Daily Mail story ("Nativity scene with two Josephs enrages conservative Colombians") reaching the New York Daily News print edition yesterday ("Gay couple in Colombia under fire for male-only nativity scene posted on Facebook").

The Daily News story was quickly picked up by several popular gay news sites including Towleroad and Queerty. Univision News tweeted a link to the story this evening to its more than 64,000 followers. Fox News Latino has a post on it today.

Who knows! If I hadn't been aware of some of the background I might have based this post on the Daily News as well.

The point here is that if there has been any controversy related to the nativity scene it has been the result of media reporting it as such and not necessarily because there was any controversy to begin with. Most of these accounts also mention that the Catholic church in Cartagena is up in arms about the nativity scene but there are no on the record comments nor direct statements attributed to anyone.  What is true of Terra.com, Caracol, the Daily Mail and the Daily News is that they never even bothered to contact Vásquez and Cárdenas to confirm the facts or get their side of the story.

It's actually not that hard to get a hold of Andrés Vásquez. If you Google his name plus "Colombia" his Twitter handle appears as the third link.  As a political analyst and entrepreneur he is actually well known in Colombia and never been shy about talking to press.  He used his media savvy to turn his civil union ceremony into a national news story back in October of 2011 (former Senator Piedad Córdoba, a key figure in the country's negotiations with left-wing guerrillas acted as the maid of honor).  It was the same contacts he used to land the Kien y Ke profile.

Yesterday I reached out to Mr. Vásquez for comment and he sent me the following message:


Regarding the recent so-called "controversy" I have made it clear to the general press that there is no nativity scene this year and that there is no such scandal. I have also told them that I have yet to see any of the social media outrage that has been claimed to exist. I haven't even been in the country for more than two months as I have been busy launching a social network I created on an international level.

When it comes to LGBT media such as OrgulloLGBT, The Advocate, Sentiido and others, I have made attempts to go further and explain how I see this as a strategic attempt by certain people in media to paint the community in a bad light.  As I said, we never built a nativity scene this year and, until the recent articles were published, there was no public awareness about it.  And yet even before people became aware of it, someone who wrote the initial piece had already tagged it as a scandal, a controversy and an act of disrespect.  They even claimed that the church had called it sacrilegious but how could that be possible if nobody was aware of it until they read the piece?

The only scandal here  is that someone took an article published a year ago, replaced the date of publication and sold it as something new in order to rile up public sentiment against the community and against a marriage equality bill making its way through the Colombian Congress.  From that point on, it was just a matter of time before international media agencies such as the AFP picked it up and from then on everyone else simply repeated the wrong information as fact.

To this day I have yet to receive an e-mail message, phone call, Facebook message of Twitter message from a single reporter trying to confirm the information or ask for additional details. And I know for a fact that many journalists back home know how to contact me as someone who is moderately well-known in Colombia.  The only ones who have reached out to me are people who work for LGBT media.

I am currently in Florida. I would have probably built a nativity scene this year as well if I had time on my hands but I have been incredibly busy. And if I had, I would probably done the same as years past because for Catholics the nativity scene is a representation of the family.  And just as some families are black and use figurines that represent them, there are also other type of families such as families with same-sex parents or single mother households or grandmothers who raise grandchildren on their own.

Mr. Vásquez is in the United States as part of the launch of GayHills.com. He has not asked me to promote his business but considering all the press he has been receiving for other unrelated reasons I thought I would point out his other endeavors.

You can connect with GayHills.com as follows:
And here is a promo video:

Excellent post! It is a responsibility of alternative media to dismantle the misuse and manipulation of information by traditional mass media just to get traffic.

I am not church. I'm an atheist and don't know about blasphemy. But I'm a mother and feel a bit peeved when anyone just completely disregards Maria's role in Jesus's birth. Maria went through a lot, given the state of healthcare back in the day. A woman't first labor is not picknick, especially out of a hospital and away from home. And they just replace her with another man. It's historically incorrect and insensitive to me as a mother. I hope one day that lovely couple get married and have a kid of their own. Then maybe they will see where this little scene is wrong.